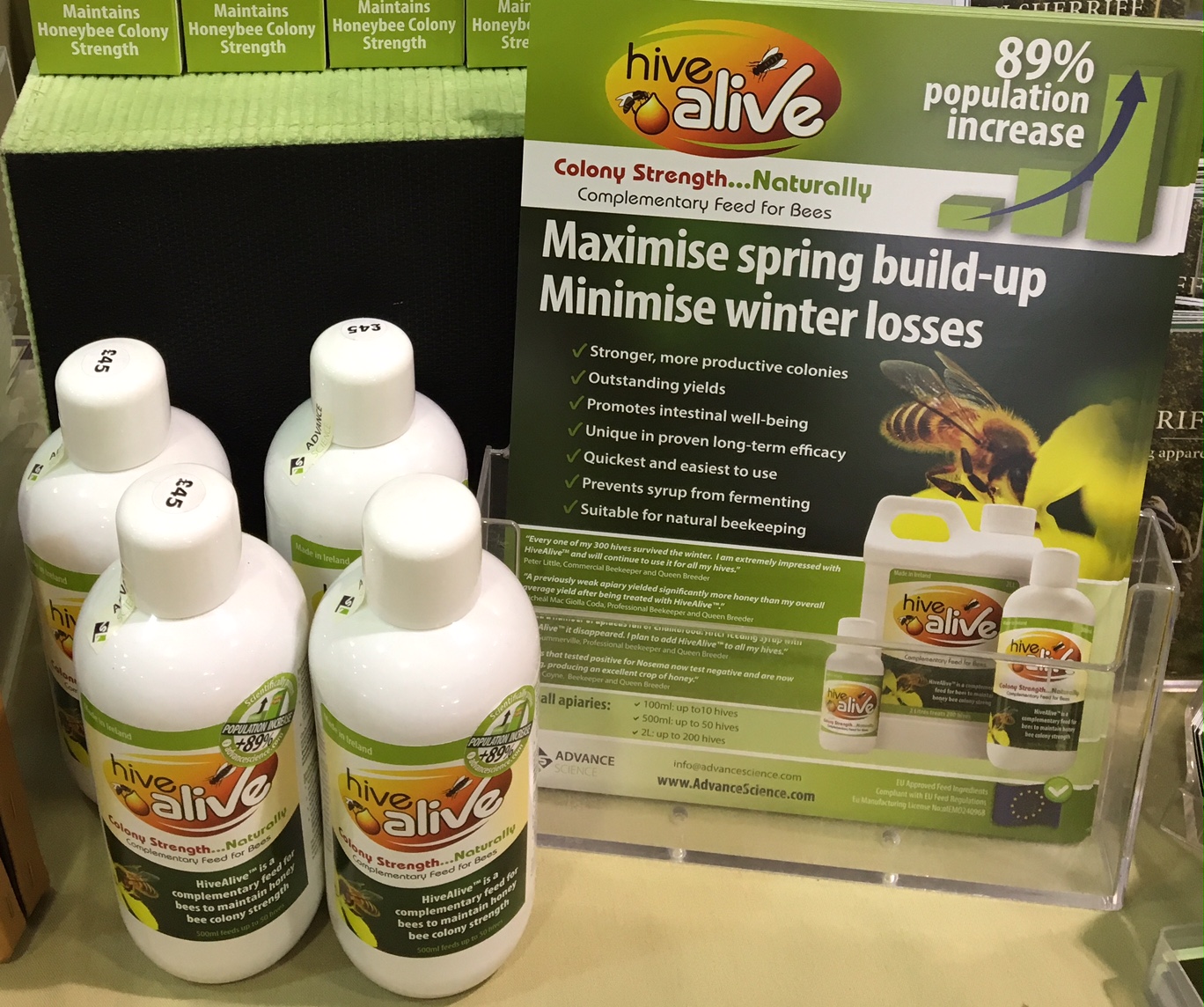 HiveAlive is a simple, safe nutritional supplement that is added to sugar syrup. It is developed and manufactured in Ireland following 6 years of internationally validated research

HiveAlive is a simple, safe nutritional supplement that is added to sugar syrup. It is developed and manufactured in Ireland following 6 years of internationally validated research.

HiveAlive™ uses only natural active ingredients scientifically selected for maximum efficacy. The key ingredient is OceaShield, a blend of bioactive seaweed extracts that are internationally recognised to have beneficial properties for both animals and humans. OceaShield™ provides a rich and nourishing food source that promotes bees’ intestinal well-being.

International trials have shown that routinely feeding HiveAlive™ produces significantly stronger colonies when compared to a control (syrup without HiveAlive™). Recent trials performed by the Hellenic Institute of Apiculture, Greece and Veto-Pharma, France consistently show increased population, brood and honey production. Up to 89% population increase was observed. For more information, go to AdvanceScience.com

For a cleaner, happier hive

Spray entire brood box before and after winter with activated syrup. Ideally once a week over 3 weeks to cover a full breeding cycle.

If bees are slow to draw out old foundation, brush on activated syrup to increase attractiveness.

Add HiveAlive™ to prevent syrup from going off. This also gives the beekeeper a longer feeding window in autumn.

“Every one of my 300 hives survived the winter. I am extremely impressed with HiveAlive™ and will continue to use it for all my hives.”

“I used 5ml of HiveAlive™ per 500 ml of syrup, and then repeated for 7 days, I saw real progress so now I use HiveAlive™ when I suspect symptoms of a weak hive. My colonies are more productive, better nourished and stronger!”

“A previously weak apiary yielded significantly more honey than my overall average yield after being treated with HiveAlive™.”

“Greek beekeepers … who added HiveAlive during spring 2015, reported good results as far as quality and
quantity of egg laying and brood extend.

We have also used HiveAlive™ in our apiary, at Rafina, Athens, and we would like to confirm the same promising results.”

“I have had three failing hives this summer …I followed your directions for spraying them which I repeated three times the last being approx 4-5 weeks ago. What a difference; whole frames full of capped brood and much more active. HiveAlive™ has certainly sorted them out. In one hive they appear to have superseded their queen. I will be ordering another bottle to enable me to feed all my hives going in to the winter as per the directions”.

“I used HiveAlive™ on all my hives last Autumn. The bees that were previously aggressive calmed down and became a pleasure to work with. The syrup did not show any sign of mould – which is a first for me. The colonies were strong in the spring and for the first time in my seven years of bee keeping we have a wonderful honey crop. HiveAlive is a good and effective product – definitely worth the investment.”

I used HiveAlive™ in the fall and in the spring. After use, more hives are surviving, the colonies are stronger and there are more workers per colony. HiveAlive™ is definitely beneficial.”

“In our Maltese study beekeepers found HiveAlive™ to be positive for overall hive health and for the preservation of syrup. We have also noticed that HiveAlive™ has improved queen acceptance in some nucs and that syrup and patties enriched with HiveAlive™ were consumed quicker than the controls.”

“I started using HiveAlive™ after I lost some of my densely populated hives. My colonies were weakening so following a workshop organised by the Association of Beekeepers of Gerona, Dr. Garrido encouraged me to try HiveAlive™. I used HiveAlive™ in October and February and I must say that there has been a dramatic improvement in population abundance, behaviour (very little hives have swarmed!) and spring yields. So far the outcome after using HiveAlive™ is positive.”

Compliant with all EU Feed Regulations